When entering and exiting the site all visitors shall adhere to the following rules:

Please note that there is limited parking available within the site (approximately 10 spaces). 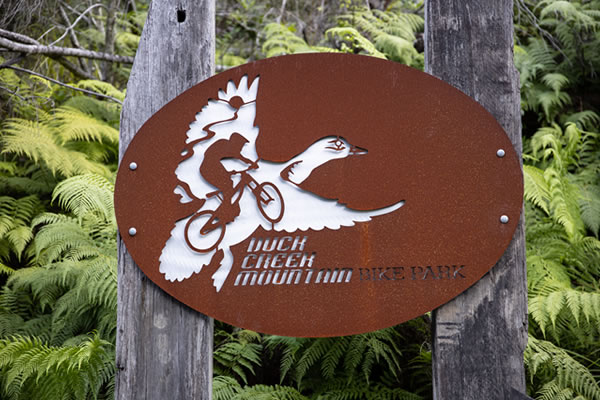 Flatline = The flattest trail we could come up with due to the steep nature of Duck Creek Mountain.

7 Year Itch = From initial concept to turning the soil, Duck Creek Mountain was 7 years of constant scratching for a number committee and club members.

200 Beats = Named by local club member Hayley Oakes.  Hayley was offered naming rights on that trail if she won a national title, which she of course did.  She came up with ‘200 Beats’ which was her average heart rate during her first national win.

Shape Shifter = The builders had to shift some shapes to create the trail and so does the rider.

Mr Fussy = The main builder of this trail can be a touch fussy at times – a good thing when it comes to trail building.

Pinzen Needles = One of the builders on this trail had lots of problems with pins and needles in their hands during construction of this trail.

Frankers Power Pipe = This trail is like a half pipe. Initially, there was a power pole across the trail that needed moving. US Founding Father Benjamin Franklin’s early experiments with electricity lead to its discovery. The Hon. Benjamin Franklin (Australian Parliamentary Secretary AKA Frankers) was a huge help in obtaining the funding for Duck Creek Mountain.

Dirt Surfer = This trail is like surfing the dirt.

Flugal Winder = This is a reference to the Tom Cruise movie Cocktail where they refer to the plastic part on the end of your shoe lace as probably having a weird name like a flugal binder. We had no trail name ideas for this one so called it Flugal Winder.

Pacific Rim = This trail is the rim of Duck Creek Mountain. The movie ‘Pacific Rim’ was on the mind of the designer when he found the trail and he named it immediately.

Your Alba = Design to look and feel very much like our old trails that were taken away from us in Uralba. Well this one is all yours.

Not Shore = Planned to be a full North Shore style trail but it ain’t on the North Shore!

Two Dogs = We had to name a trail after two people who were instrumental in getting Duck Creek Mountain to eventuate. They came close, but never gave up, just like a couple of dogs on a chain.

Geezer = We also had to name a trail after the site designer. When it was being built the contractors nicknamed him “Geezer”.

Extractor = This trail runs near our boundary with the neighbouring quarry.

Wrecked = While building this trail we found the wreck of an old car near the top of the trail. Being an ascending trail, it might Wreck some people as well!

Groot = A rooty, techy trail named after a famous superhero.

A huge thank you to our trail sponsors

How To Get There

The site is situated approximately 5 kilometres east of Alstonville on the northern side of the Bruxner Highway. The access driveway is approximately 500m west of Gap Road.

Please note the entrance is Left In and Left Out only. Do not turn right under any circumstances.

The trail network has been designed for the exclusive enjoyment of mountain bike riders of a variety of abilities. Other recreational uses such as walking, running etc are not permitted on the trails.

Some trails will be more difficult than others. The network includes natural terrain, constructed technical features, obstacles, drop offs, bridges and steep land. The trail surface may change over time and make riding more difficult. Take care at all times and always ride within your ability.

There is limited parking available within the site.

There is no water available at this facility. Water is available in Alstonville which is approximately five kilometres to the west.

There is one portaloo on site that is supplied and maintained free of charge by Betta Hire in Ballina.

Camping is not permitted.

A trail map is provided in the car parking area.  Trails are also available on the TrailForks APP.

All trails are sign posted with the trail name, direction and difficulty rating.